Oregon City is the county seat of Clackamas County, Oregon, United States, located on the Willamette River near the southern limits of the Portland metropolitan area. Oregon City was established in 1829 by the Hudson's Bay Company. In 1844, it became the first U.S. city west of the Mississippi to be incorporated.

Oregon City played a significant role in the early history of the Oregon Country. It was established by Hudson's Bay Company's Dr. John McLoughlin in 1829 near the confluence of the Clackamas River with the Willamette to take advantage of the power of Willamette Falls to run a lumber mill. During the 1840s and 1850s it was the last stop destination for those wanting to file land claims after traveling the Oregon Trail. This is how Oregon City became fondly known as the End of the Oregon Trail.

From 1848 until 1851, Oregon City was the capital of the Oregon Territory, which encompassed an area that included the current states of Oregon, Washington, and Idaho, as well as parts of Wyoming and Montana and rivaled Portland for early supremacy in the area. In 1846, the city's newspaper, the Oregon Spectator, was the first American newspaper to be published west of the Rocky Mountains. Today the center of the city retains part of its historic character through the preservation of houses and other buildings from the era of the city's founding.

Oregon City is a city of firsts which include the world's first electric power grid, the first Protestant church west of the Rockies, the first navigation locks in the Northwest, the first paper mill in Oregon County, the first interurban electric railroad in the County and now the first distillery since Prohibition.

Find your own trail with Trail Distilling 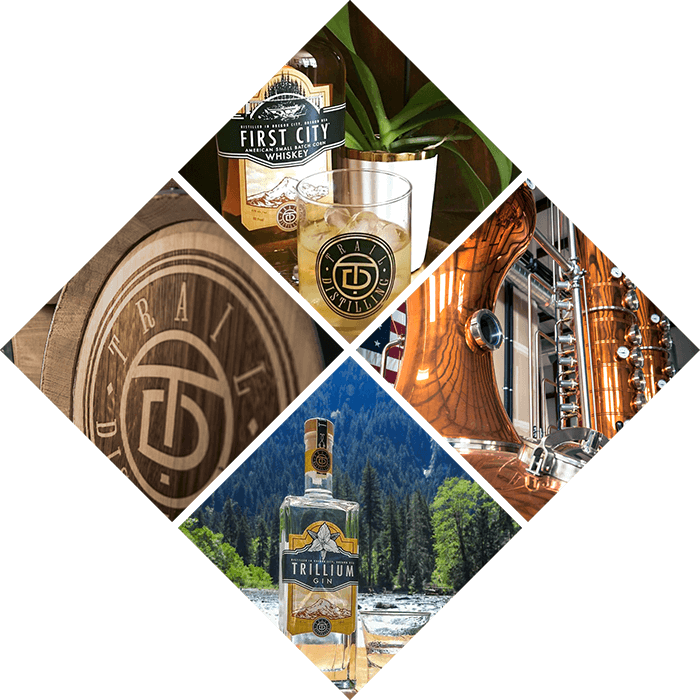 THE ALCOHOL PRODUCTS ON THIS WEBSITE ARE INTENDED FOR ADULTS ONLY.
By entering this website, you certify that you are of legal drinking age in the location in which you reside (age 21+ in the United States).